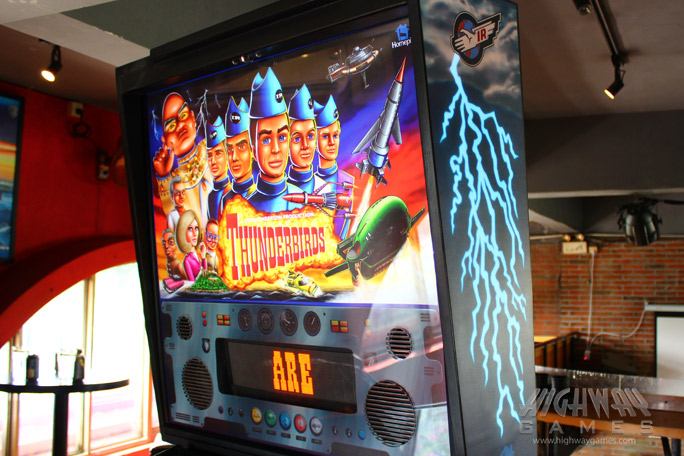 Highway Games is proud to announce it will distribute the first officially licensed pinball table from Homepin – Thunderbirds – based on the classic puppet science fiction series from the 1960s.

Thunderbirds immerses players in all the action of the International Rescue team, featuring authentic character voices and original music. The playfield includes Tracy Island with its retracting swimming pool and palm trees, which combined with the animated panels and authentic artwork on the backbox, create a retro effect combined with modern twists. With the ultimate aim of defeating International Rescue’s nemesis The Hood, the multi-gameplay of this machine makes it suitable for both novice and experienced players alike.

Homepin was founded by Australian Mike Kalinowski in 2013, with its manufacturing facility based in Shenzhen, China. The factory is managed by Australian electronic engineers with a combined industry experience in excess of 85 years. The company also manufactures a wide range of replacement PCBs.

“Thunderbirds is our first branded pinball table and it has been a labour of love for the team at Homepin, as we have been working on it for four years,” says Mike. “I watched the series as a kid in Australia, so it’s has been especially thrilling to create the first pinball table based on the title. I am very pleased to have Steve and the team at Highway Games for distribution and support.”

“As Australians, we too grew up watching Thunderbirds and we are very excited to work with Mike from Homepin to set up a profession distribution network for this great title across the world both for the coin-op and the home markets,” says Steve Josifovski, CEO of Highway Games. “Mike and his team have spent years meticulously creating every piece of Thunderbirds, we are very happy to be associated with it.”

To join our distribution team across the world, or, to check where to purchase, please contact our team at sales@highwaygames.com or call our head office +61 249 689 313.

Thunderbirds is a 1960s British puppet science-fiction series created by Gerry and Sylvia Anderson. Broadcast in over 66 other countries; it was first broadcast on ITV in the United Kingdom. Widely known as the Andersons’ most popular and commercially successful series. Set in the mid-2060’s, it follows the life-saving organization called International Rescue (IR).

Homepin was established in 2013 and was born from the hobby business of Mike Kalinowski, who has been importing from China for more than ten years and established an office in China soon after commencing. Mike manages a fully functional factory from scratch in Shenzhen, China, designing and producing high quality pinball and arcade machines. Mike is an electronic engineer who has worked on electronic (SS) pinball machines since 1978. Prior to that he worked at a small electronics factory in Brisbane, Australia, designing and making radio control systems for modellers and Government departments. This, combined with 35 years of practical experience in the amusement industry, creates a very unique combination of skills that few possess allowing him to re-design many different pinball PCBs re-creating them with updated electronics and/or more easily available components. Mike is supported by a small dedicated team of experienced designers, engineers and technicians.